Arab strength of the XIII century, located in the Penya del Castellet, at 1,100 meters of altitude, being the highest castle in the province of Alicante. It is 2 kilometers from Confrides, and 4 kilometers from Abdet.

Still being in ruins, you can find a lot of elements, such as its wall in Arabic rampart, its cistern, and much of three of the defensive towers, two of cylindrical section and one of rectangular section, with the north tower being the only one totally lost .

Built in 1772, it is the oldest existing trinquet, and one of the few where Pilota Grossa is played.

With dimensions of 18 meters long and 2.5 meters wide, originally it was made of pressed earth and stone walls with mortar, it has undergone different reforms over the years. Between 1940 and 1950 the soil was cemented as well as its coated walls.

Its last reform, in 2006, was covered with non-slip paint and painted in different colors in order to differentiate the play area more easily. 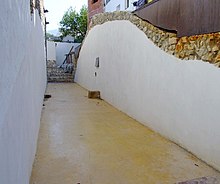